Aloha! I’m Marco, jumped on Zero in Banderas Bay couple of days before saying “hasta luego” to Mexico.
I come from the Mediterranean Sea but I’ve traveled and lived in Western Australia, Indonesia, New Zealand and Hawaii in the last few years.
I like surfing, enjoying nature in all her shape, play the guitar and stay healthy with some exeptions, I’m keen for missions and adventures and today we scored.
We’re anchored on the East side of Soccoro Island and there is a cave really close and visible from Zero, we could touch land again and the access looked easy from Zero.
The Captain, Fey, Juan and me jumped on board of our dinghy, fire the motor up and going towards the cave. We anchored pretty close to the cave and we start swimming to shore, a big rocky shore.
It wasn’t as easy as I thought, there was a strong outgoing current and getting to land seemed to be a bit gnarly, I was almost there and I could see big rocks appeared when a huge set of waves came.
The Captain could get on shore, after a wet Rock and Roll; instead me, Juan and Fey swam along the coast and, like a crab, we made it to land as well.
After this intense session of swimming, climbing and breathing we saw that the cave became a big lava tube, where the wind was stronger and the other side of the cave was facing to another bay, with big lava rocks and a long cliff along the bay like a “panettone” .
On these walls there were strange signs like if “Pachamama” wrote strange things, maybe some note hidden by everyone.
After exploring, being grateful and enjoy the untouched land, we came back to the dinghy, but it was too early for lunch…
I was driving to the boat while the Captain made the sign to go to the point and see what’s going on down there. Just a couple of minutes later and we were anchored at the point. There were a few White Tip Sharks around, I like the way they swim and when they appear from deep water. Juan and the Captain went first and start singing into the water. Apparently Mantas Ray like sea music and suddenly a big one appeared under them. Me and Fey jumped into the water too and we all enjoy and observe the elegance of this fish. The Manta Ray was beautiful and big, when the Captain dove down a couple of times, I could see him pretty small compared to her.
Not to bad for this morning , when we head back to the boat, Taiichi prepared us a special Russian meal for everyone, I must say that we’re pretty lucky to have chefs on board. And Fey’s “Panino” for dinner was the best sandwich I’ve ever had in the last few months. Better than a restaurant Taiichi said, and I think he’s right.
Now the sun sets behind the island and Zero is playing the last solo of November Rain by Guns and Roses, I’m outside and we’re ready for watching a sailing movie: See Gipsies.
Buona Notte Marco
Sent from the Ocean. 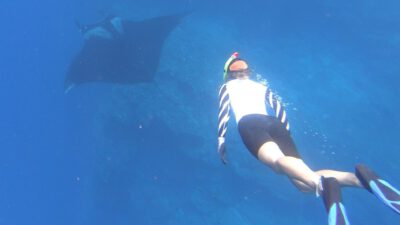