What describes our day the best?
Up…and down…up…and down…
Yesterday night the wind slowly started to pick up from 10 to maximum 14 knots. We were prepared and the main sail was in it’s first reef already. Early in the morning it picked up to almost 15 knots and know it’s gusting up to 17 knots. Main and mizzen are in it’s first reef and the Genoa is about 50% furled in.
Doesn’t sound like a lot of wind, but we’re sailing right into it and experiencing appearend winds up to 22 knots with the waves right on our bow. One out of three times ZEROs bowsprit is digging in a wave, creating a lound smashing noice through the whole boat with occasionally waves splashing over the dodger.
Patch and I are laying next to each other in the pilot house snuggled up under a blanket, trying to sleep as much as possible, cause the sea sickness got me back. What a shame! But the boat movements creat a rollercoaster like sensation in my brain and stomach and I can’t do much.
Christian prepared a hot and salty soup for us and is checking on wind and sails every once in a while. The weather forecast predicts winds up to 20 knots for the approaching 36 hours which will keep us busy especially during the night.
The Marquesas Islands, the last islands in french polynesia, are about 300 nm away from us. With every mile further we’re slowly saying goodbye to all the great moments we had in those beautiful places of paradise.
To all of you a very good day Cheers Fay
Sent from Iridium Mail & Web. 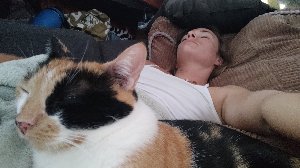