Ahoy, Yesterday I finished building a new lure and we took it to a test today. A nice big squit style lure with big eyes and purple, blue and white colors.
First I was disappointed that we didn’t catch anything right away. No I’m not a patient man!! But a few hours later we heard the promising song of the fishing reel. The break was giving way and I tried to tighten it a bit more. We were sailing with 7.5 kn through the water and something big was pulling hard.
With the sails untouched we just changed course 20 degree into the wind and we started to stall. Now with the boat speed significantly reduced I started reeling it in. Man that thing was resisting quite a bit and with so much line out already it was a good exercise. But finally we had him close to the boat and could see it. Is that a wahoo? Or a Marlin? Hold on maybe a sailfish??
Our excitement grew bigger and bigger with every meter it came closer to ZERO. It definitely has a nice sail on the back but no bill? It’s like a Marlin but without bill. Anyway, time to get him aboard.
I handed Fay the fishing rod and she gave me the gaff instead. One good pull and I had him, swung him over the lifelines and holded him down. A quick stab with the knife and it was over. Wow. What an amazing catch. That will definitely be enough fish for the whole passage. So we can store the fishing equipment out of salt and sun.
The book finally solved the mystery. It’s a short bill spearfish. It took us almost the whole day to clean it but our freezers are full of nice filets now, enough for a whole soccer team. What a feast..
Aloha Cris
Sent from far offshore.. 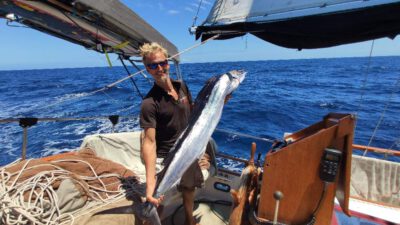